Brexit: a lose/lose for Britain

The European Union’s reaction to Brexit will follow one of two routes.

THE UNITED STATES OF EUROPE

a powerful bloc of half a billion people in fulfilment of the dreams of the founding fathers of the EU. A united Europe to take the lead in international politics , with a strong united stand on defence and away from the current instinct and emotion – propelled politics and diplomacy.

Estrangement for its European allies will cause economic damage to the UK and no discernible benefits. The economic losses of the EU in the short term would pale into insignificance compared to those the UK will face.

The Brexiters are proven right. Europe implodes into its pre-war component states each vying for their own self-interest. In other words, a return to the dark days of the supremacy of the NATION STATE. Back to the days of the Weimar Republic where dog eats dog with catastrophic consequences. Rule by populism leading to the emergence of dictatorship.

Brexit would also cause severe political damage and would weaken Europe geopolitically. 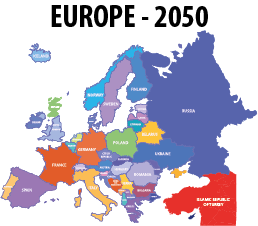 “Those who do not learn history are doomed to repeat it.”

10,000,000 European lives sacrificed.
In just one year, 1638 there were five separate wars occurring in Europe.
There were only 4 years free of warfare in the whole century. The other 96 years all saw conflict of some kind.
The total number of separate wars was 42.

20,000,000 European lives sacrificed.
Many other parts of the world were also dragged into Europe’s conflicts.
The total number of separate wars was 43.

45 to 90,000,000 European lives sacrificed.
It also dragged many other parts of the world into its conflicts.
The total number of separate wars was 52.

Brexit, Trumpism & the Elephant in the Room

Islam at the Crossroads of History